I’m super excited to reveal the beautiful cover of Stray today, which is the sequel to the mindblowing Spark!

Spark is such a beautiful cover, it really caught my attention and something completely different to the other YA covers I’ve seen today.

I’ve been hanging out for this cover reveal and I’m pleased to say it’s completely beautiful!

It’s hard to remember hating anything as much as I hate Affinity; a bone-deep loathing for the faceless unknown and the concrete walls of my own DNA.

Evie is a Shield: designed to kill in order to protect, and the Affinity Project have finally come for her. But Evie isn’t ready for the sinister organisation to take control of her life, her body, her mind. She isn’t ready to follow their rules about who may live and who must die – not when it condemns the innocent. She has one option: risk losing everything and everyone – including Jamie – and run.

It’s a little creepy with the decapitated head but look how gorgeous it is next to the original!

Evie doesn’t have a choice. One day she’s an ordinary seventeen year old, grieving for her mother. The next, she’s a Shield, the result of a decades-old experiment gone wrong, bound by DNA to defend her best friend from an unknown killer. The threat could come at home, at school, anywhere. All Evie knows is that it will be a fight to the death. And then there’s Jamie. Irresistible. Off-limits.

Check out my Review of Spark here. 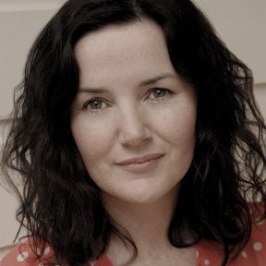 Rachael Craw studied Classical Studies and Drama at the University of Canterbury, but became an English teacher after graduation. Working with teenagers has given her a natural bent towards Young Adult fiction and a desire to present a feisty female protagonist in her writing. Her debut novel, Spark, is the first in a series released with Walker Books Australia from 2014. Rachael was born and raised in Christchurch, New Zealand, and currently lives in Nelson with her husband and three daughters. Visit her online at www.rachaelcraw.com

« Me Being Me Is Exactly as Insane as You Being You Review: Lists > Story
Saga Volume 1 & 2 Reviews: Expect the Unexpected »