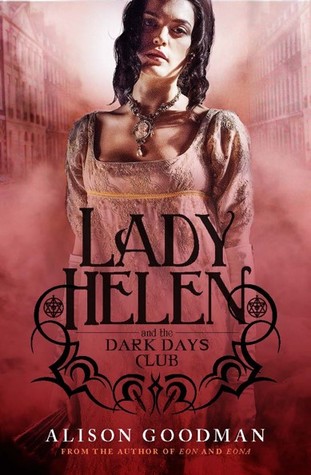 London, April 1812. Lady Helen Wrexhall is set to make her debut at the court of Queen Charlotte and officially step into polite Regency society and the marriage mart. Little does Helen know that step will take her from the opulent drawing rooms of Mayfair and the bright lights of Vauxhall Gardens into a shadowy world of missing housemaids and demonic conspiracies.
Standing between those two worlds is Lord Carlston, a man of ruined reputation and brusque manners. He believes Helen has a destiny beyond the ballroom; a sacred and secret duty. Helen is not so sure, especially when she discovers that nothing around her is quite as it seems, including the enigmatic Lord Carlston.
Against a backdrop of whispered secrets in St James's Palace, soirees with Lord Byron and morning calls from Beau Brummell, Lady Helen and the Dark Days Club is a delightfully dangerous adventure of self-discovery and dark choices that must be made ... whatever the consequences.

So we recently read Lady Helen and the Dark Days Club together, and thought it’d be fun to discuss it together! Read on to find out what we thought about this regency paranormal book and find out our ‘inside joke’ about tentacles…

Jeann: So it took me ages to get into Lady Helen, but I’m glad I finally picked it up again after DNFing it a few months ago! The beginning was really, really slow and detailed but it really picked up towards the end. I thought it ended up being a lot of fun, like a regency comedy! What are your initial thoughts on it?

Aila: From your thoughts after you passed the book to me Jeann, I was already prepared for a sluggish beginning and some tentacle action. Your little sticky notes on certain parts of the book had me laughing out loud at times. I was really drawn towards the regency world and Helen’s character! Her wit was just absolutely charming and suited the time period she was in. I’m pretty sure what stuck with everyone throughout the book were the tentacle bits though.

Jenna: I was a bit hesitant to pick up this book since I knew Jeann had DNFed it a while ago but I really love historical novels so I decided to finally pick it up. It was quite slow-paced for most of the book but I still ended up speeding through the book in two sittings. I loved that the book was authentic to the time period and I enjoyed the charm of the Regency period. But yes, the tentacles were definitely the most memorable aspect of the whole book. I kind of knew what to expect going into the book because Jeann had told us about it while she was reading it the first time… but it still ended up being weirdly sexual. Maybe it wouldn’t have been as strange if Jeann hadn’t drawn my attention to it but who knows?

Jeann: HAHAH C’MON GUYS you read that quote I showed you:

Initially, what surprised me to begin with was the tentacle sex demons in the book. Tentacles are weird to begin with but these deceivers go around trying to impregnate women so they can spawn demon children and feed off their energy through ‘fornification’! And they also sexually harass victims in public who are none the wiser, and they look at porn at home so they can ‘get energy’ from that! I was seriously taken aback, but in the scheme of things it fit in with the whole slapstick aspect of it, and the time period being a repressed regency society. There could be nothing more scandalous that you need to save people from lol!

Jenna: Haha that’s so true! I did enjoy that there were different kinds of demons who didn’t all feed off lust. There were demons that fed off art and creativity, or violence. But yeah, just the nature of the demons and the fact that they all had tentacles that they ‘plunged into their victims’ was a bit… disturbing. *covers eyes* And the fact that we’ve only just scratched the surface of the world in this book scares me a little bit. I’m sure there are even stranger things to come!

Aila: Oh definitely! For example, I imagine the Grand Deceiver to be some jumbled up mass of tentacles or “whips,” as they call it in the book, that’s all slimy and gooey. (Have we ruined calamari and sushi for you guys yet?) But given the name, it seems like the main enemy the Dark Days Club is going against is going to be a huge surprise.

Aila: Speaking of the Dark Days Club, I really enjoyed that supernatural aspect! Although it was dramaticized at times (lending it a fairly comical take), the paranormal battle going on under the ton’s noses is so intriguing to explore.

Jeann: I really enjoyed that supernatural aspect as well! It was fun learning about the deceivers and how they got their energy and how the Dark Days Club is a hidden society protecting the world from demons. I liked the concept of reclaimers as well, and how they could exorcise a demon and return the human soul. The reclaimer powers were my favourite part, particularly when Lord Carlston fought against three deceivers and their whips – it was over the top and completely hilarious! I can really see Lady Helen growing into her newly found position and she took everything in stride.

Jenna: Yeah I really enjoyed Lady Helen’s character. She was very mature and sensible, so I liked her a lot as a main character and heroine. I’m excited to see how she handles her training in the next book. Overall, I really enjoyed this book. I wasn’t as big of a fan of the paranormal elements as you both seem to be, though. There were some aspects that reminded me of the Shadowhunter books and, strangely, Twilight… but the world building has only really just started so I’m excited to see what else this series has to offer. My favourite aspect was definitely the setting and time period. It was lovely. I rated this book 4 out of 5 stars.

Aila: I can’t wait to see what’s in store for us, too! I think once you get past the whole raging tentacle pulses that inundate the characters, it’s really easy to get into this book. The well-researched historical background provides a great backdrop for all the supernatural turmoil going on that Lady Helen finds herself embroiled in. Although it may start off slow, I can’t say that uncovering the mysteries of the tentacle demons and watching Lady Helen’s development didn’t keep my eyes glued on the page. I’d give this book 4 pulsing tentacles out of 5 as well!

Jeann: I liked her character too, she was intelligent and curious, but still acted within the confines of the society – which made it more authentic. I really liked the supernatural setting, the historical authenticity of the time period and the comedy of it all. However, the slow beginning and the shocking tentacle aspects put me off at the start. Overall, I’d give it 4 tentacles!

Thanks to HarperCollins Australia for sending us a review copy!

Check out the interview with Alison Goodman here.