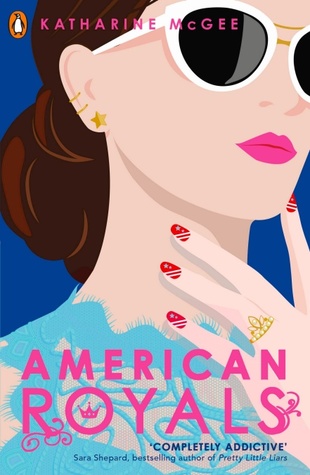 Meet the Washingtons - the most scandalous royal family ever!

HRH Princess Samantha has always been a royal rebel. She's the spare not the heir, so no one minds too much who she dates or how hard she parties.

It helps that her sister, Princess Beatrice, is literally perfect. She's demure, sweet and beautiful, and she knows that the crown always comes first - no matter what her heart might really want.

But they're not the only ones with their eye on the throne. Daphne Deighton might be 'newly noble' but she won Prince Jefferson's heart once, and she'll do anything to get back into the court's favour - and his bed.

If only she knew that her competition was a common nobody - plain little Nina Gonzalez, the daughter of the king's secretary.

Together these four young women must navigate the drama, gossip, scheming and sizzling romance of the most glorious court in the world. There's everything to play for - but there can only be one queen.

My gosh did I love this book! I can’t believe I have to wait another whole year until the sequel is released. I was left with so many thoughts and feels and honestly went searching for American Royals fanfiction… only to realise that there was none.

It’s really no surprise that I enjoyed American Royals so much. I loved Katharine McGee’s first series, The Thousandth Floor, because of the beautiful writing, the interesting characters, the multiple POVs, the futuristic setting and the Gossip Girl vibes. I enjoyed American Royals for many of the same reasons (though this one is much less controversial since there wasn’t a romance between adoptive siblings) and felt really attached to the characters and their stories. The book has been marketed as Crazy Rich Asians meets The Crown, but in my opinion it’s more The Crown meets Gossip Girl (particularly because there are really rich people, but none of them are Asian). Regardless, these are all things that I love so American Royals was bound to be a success for me.

American Royals follows the Washingtons, the royal family of America, who are modelled after the Windsors. If I had one gripe about this book, it would be that the Washingtons are much too inspired by the Windsors and there were scenes in it that were super reminiscent of The Crown. But the characters are well-fleshed out and complex. There’s Princess Beatrice (based on Queen Elizabeth II), who is next in line to the throne and finds herself having to choose a husband among suitors that her parents have picked out for her. She’s the perfect princess and has been groomed her whole life to become America’s first queen. Except, she kind of has feelings for her royal guard. Princess Samantha is the rebellious younger sister who finds herself unwittingly attracted to one of her sister’s suitors. Her twin brother, Prince Jefferson has recently broken up with his long-time girlfriend, Daphne, and is interested in Samantha’s childhood best friend, Nina, who happens to be a commoner. But Daphne will do anything to make sure she marries Jefferson and becomes a princess.

There are countless twists and turns and, even though there’s no narrator like in Gossip Girl, you really feel a sense of things never turning out the way that they should. There’s manipulation and intimidation, hidden romances and unspoken secrets. And of course, there’s always paparazzi when you least want it. The multiple perspectives made this book exciting to read and Katharine McGee has really nailed the execution of the multi-POVs in all her books. I absolutely inhaled American Royals and thoroughly enjoyed the plot of it. It was just endless amounts of fun and I really do wish I had the second book on hand because I won’t be able to stop obsessing over what I want to happen next.

I really enjoyed the romance in this book, particularly the blooming relationship between Jefferson and Nina. Just like in The Thousandth Floor with Rylin and Cord, there’s nothing I love more than a “commoner” falling in love with one of the “elite”. Nina definitely isn’t afraid to speak her own mind and tell it like it is, so I can’t wait to see what happens in the sequel. I also loved Beatrice’s relationship with Connor. Despite how little we really got to see of these characters being together, I’m extremely invested in everything that’s about to unfold. Also I can’t wait to see Daphne get what she deserves.

American Royals has been my favourite book that I’ve read for a while and I’m beyond excited for the sequel. Katharine McGee hasn’t disappointed me yet and I may love these characters and the plot even more than I did The Thousandth Floor trilogy.

Thank you to Penguin Australia for sending a review copy.

American Royals is available at all Australian retailers for $16.99 RRP.

Co-Blogger at Happy Indulgence Books
Jenna is an Aussie blogger and reader who loves to indulge in great books and great food. She is a doctor (of philosophy) and can usually be found fangirling about something, devouring delicious food, or taking a nap. You can find her on Twitter @readwithjenna and on Instagram @readingwithjenna.

Latest posts by Jenna (see all)

« 5 Things I Loved About Capturing the Devil
The Lady Rogue Review: What Kind Of Secrets Can We Find, Dashing Through Romania? »