You go through life thinking there’s so much you need…
Until you leave with only your phone, your wallet, and a picture of your mother.

Marin hasn’t spoken to anyone from her old life since the day she left everything behind. No one knows the truth about those final weeks. Not even her best friend, Mabel. But even thousands of miles away from the California coast, at college in New York, Marin still feels the pull of the life and tragedy she’s tried to outrun. Now, months later, alone in an emptied dorm for winter break, Marin waits. Mabel is coming to visit, and Marin will be forced to face everything that’s been left unsaid and finally confront the loneliness that has made a home in her heart.

Grief. There’s so many different ways to experience it. There’s the shock, where someone who you loved is now gone, leaving behind emptiness. There’s the anger and the regret, wishing you spent more time with them and wondering why they were taken away. Then there’s the quieter type of grief, where you just need some time to reflect on your own about the good and bad times you had with each other.

We Are Okay deals with the quieter side of grief, where Marin has moved away from her home after losing her grandfather. He is the only family that she’s ever had, so there’s no one else she can rely on. Until she remembers her best friend Mabel, who she’s cut out of her life but has now flown across America to see how she’s doing. Here, most of the story unfolds as Mabel jogs her memory of her old life and her home. 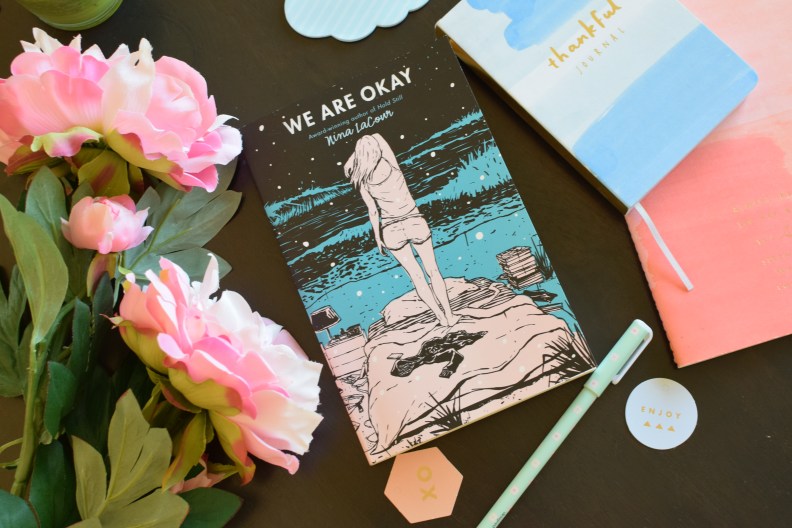 Set over the Summer break, we find out about Marin’s grief and deep seated emotions which lead her to run away from everything she’s ever known. It’s a slow reveal, as she comes to terms with losing her grandfather, doesn’t want to escape the comfort of her new life and realises she doesn’t need to deal with it all alone. Her journey is a beautiful one, wrought with heartfelt emotion and angst, and one that packs a punch. It’s not often you read about the bond with a girl and her grandfather, and We Are Okay captured it beautifully.  I loved how we experienced her memories with her grandfather and the quiet camaraderie they shared.

It’s strange how well We Are Okay captured the intense feeling of loneliness, especially since Marin is accompanied by Mabel throughout most of the book. It’s clear these girls share a close bond, as they know each other so well, from their favourite snacks, to knowing when they don’t feel like speaking, to being comfortable in each other’s presence. While Mabel clearly cares a lot about Marin, I didn’t really get a great sense of who she was as a person, outside of her feelings for Marin and her large, Mexican-American family.

It was terrifying, the idea that we could fall asleep girls, minty breathed and nightgowned, and wake to find ourselves wolves.

The book also explores the relationship between Marin and Mabel, as they were best friends who progressed into lovers. Their relationship is sweet, with a lot of unresolved feelings which are explored further as the book progresses. I loved how their sexuality was depicted in meaningful way, without being too preoccupied with labels. We definitely don’t have enough lesbian relationships in YA and this one was done beautifully.

We Are Okay explores grief, loneliness and the bond with a girl and her grandfather in a heartfelt and poignant manner. At it’s shorter length, it packs an emotional punch, beautifully putting together the pieces of the puzzle throughout the book. It was also wonderful seeing the complexity of a best friend to lovers romance explored between two girls. However, while I enjoyed the book, I didn’t feel like it was incredibly memorable and I’ll forget it in a month’s time.

Check out my review on Nina’s other book, Everything Leads to You.

« Double Reviews: Love, Ghosts and Nose Hair & A Place Like This
Vengeance Road Review: Revenge in the Wild West »

30 responses to “We Are Okay Review: A Quiet Contemplation of Grief”

Did you get anything from the Black Friday sales?
How do you feel when you open a book?
What was the last book you finished?
Super random prompt today haha! Predictive text time: I met the otter and we ______.
What is one of your bookish bad habits?
Anyone else do this all the time 🤣
Do you like using the same filter for your posts or do you change it up?
What are you doing/reading this weekend?
What book did you read for Halloween?